Any excuse to put on a costume... 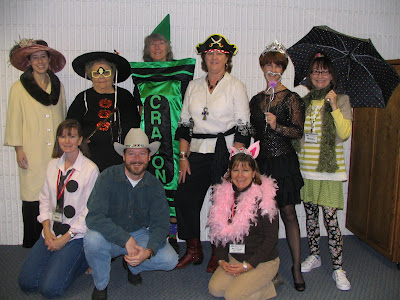 Librarians do love to play dress-up!
Happy Halloween!
Posted by Rishara at 10:20 AM 7 comments: 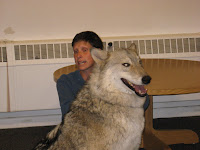 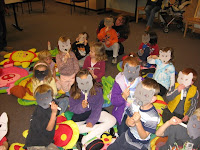 Our storytime kids had a chance this month to participate in their own activities for the Big Read. They learned some facts about the state of Alaska and the animals that live there. In Columbia Falls a dog that has a wolf ancestor came for a visit.The kids in Whitefish made wolf puppets. And in Bigfork several young artists made some beautiful pictures of sled dogs that included sparkly snow! When we talked about the Alaskan Gold Rush in Kalispell, the kids got to practice their gold panning skills and even got to take some special gold treasures home. 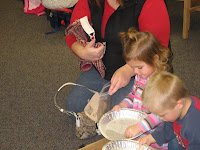 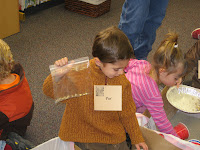 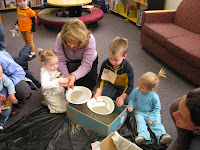 check it out! books

I was recently home sick for several days. The only good thing about the entire ordeal was that I was able to finish three books and a couple of dvds. My friend, Kate, recommends books to me on a regular basis and constantly scolds me for never reading any of them. Well, I finally picked up and read Infidel by Ayaan Hirsi Ali, which Kate had left at the house several months ago. I was shocked and angered at some of what I read but at the same time touched by this courageous woman's life story.
From the BOOK JACKET: "In this memoir from the internationally renowned author of The Caged Virgin, Ayaan Hirsi Ali tells her astonishing life story, from her traditional Muslim childhood in Somalia, Saudi Arabia, and Kenya, to her intellectual awakening and activism in the Netherlands, and her current life under armed guard in the West." "One of today's most admired and controversial political figures, Ayaan Hirsi Ali burst into international headlines following an Islamist's murder of her colleague, Theo van Gogh, with whom she made the movie Submission." "Infidel is the eagerly awaited story of the coming of age of this elegant, distinguished -- and sometimes reviled - political superstar and champion of free speech. Hirsi Ali recounts the evolution of her beliefs, her ironclad will, and her extraordinary resolve to fight injustice done in the name of religion. Raised in a strict Muslim family and extended clan, Hirsi Ali survived civil war, female mutilation, brutal beatings, adolescence as a devout believer during the rise of the Muslim Brotherhood, and life in four troubled, unstable countries largely ruled by despots. In her early twenties, she escaped from a forced marriage and sought asylum in the Netherlands, where she earned a college degree in political science, tried to help her tragically depressed sister adjust to the West, and fought for the rights of Muslim immigrant women and the reform of Islam as a member of Parliament. Even though she is under constant threat - demonized by reactionary Islamists and politicians, disowned by her father, and expelled from her family and clan - she refuses to be silenced." "Ultimately a celebration of triumph over adversity, Hirsi Ali's story tells how a bright little girl evolved out of dutiful obedience to become an outspoken, pioneering freedom fighter. As Western governments struggle to balance democratic ideals with religious pressures, no story could be timelier or more significant."
Posted by kc at 1:35 PM No comments:

check it out! Downloadable Audio

We went LIVE with downloadable audio 8 days ago. What is downloadable audio? From your home computer (or your laptop on a wireless network) you can download audio books and listen to them on an MP3 player or iPod. All you need is a valid Flathead County Libray card!

Since we linked up to MontanaLibrary2Go on our website 8 days ago (the link resides on the left hand side of the webpage) there have been 66 downloads. They're not exactly flying off the virtual shelves, but our customers have been savvy enough to figure it all out!

Books check out for 14 days, at which time the downloaded file will become unuseable on your computer and the book is available for someone else to download. We have classics, such as Call of the Wild and Moby Dick, as well as contemporary reads like Dear American Airlines, True North, and Tweak--over 2,000 different titles in all!

Get connected and download an audiobook today!
Posted by kc at 11:37 AM No comments: 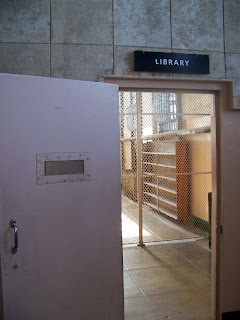 I've been travelling a bit and was fortunate enough to visit Alcatraz and not have an extended stay there. I found the library portion more interesting than I would have before becoming an employee of FCL. My favorite rule in the library section (44) is subrule #5...

5) Handle library books carefully. Many of the worn out books, especially fiction books, can not be replaced since they are out of print. You are cautioned not to loan or exchange books with other inmates or to toss books to other tiers or the flag. Defacement, mutilation or destruction of books will be cause for disciplinary action even to the extent of forfeiture of good time.

Please, please handle books with care so that the Flathead County Library doesn't have to stiffen our policies from 10 cents a day to forfeiture of good time! 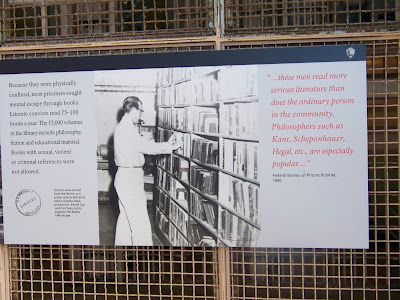 Posted by Brett Fisher at 8:13 AM No comments:

If you have ever been stuck and can't quite find the right book, check out the website called Book Finder.Just make your choices and see what's out there for you.

If you like to read books in a series, and can't remember what book comes next, try looking at this site. The librarians at the Mid-Continent Public Library, who made this website, are terrific and work really hard to keep everything up-to-date.

Don't forget that you can come to any library and let us to help you pick out the perfect book to read!
Posted by Lynn for Kay...mom, grandma, aunt, and friend at 7:45 PM No comments: